Rethink Your Diet Now, and Eat the Mediterranean Diet Way 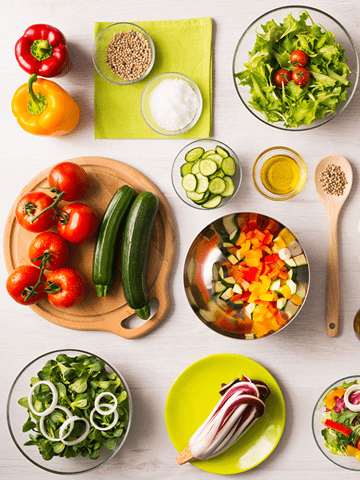 The Mediterranean region is the birthplace of human history, as far as our records show. For thousands of years, the Europeans, Africans, and Asians have gathered around this geographical and cultural center that forms a cross-roads for all of the old-world cultures. It is here that virtually every new and exotic thing which was discovered in a far off land was brought, imported, cultivated, tested, and improved, from philosophies to agriculture. And from it all has sprung the cumulative wisdom of the centuries, as it applies to diet.

The Mediterranean diet is composed chiefly of the foods of Italy, Greece, and Spain, although other cultures have input as well. Understanding the ways in which the Mediterranean diet differs from the typical American diet can help us improve our eating habits and enjoy improved health through these dietary changes.

The most distinctive difference in the diet is the high consumption of fruits and vegetables, bread and other cereals, olive oil and fish. Almost no red meat is present. Certainly very little processed foods are present, and the idea of dipping something in batter and deep-frying it is taboo. Likewise the consumption of empty calories in starches and sweets; you will never find french fries on the Mediterranean plate.

If you live in America, the next time somebody asks what your favorite food is, say, “partially hydrogenated vegetable oil!” Why not? It’s in everything! But it’s nowhere to be found in the Mediterranean diet; extra virgin olive oil reigns supreme here instead. The cumulative result of all of these differences is a nutrient-rich diet, high in fiber, with a low glycemic index and lean protein.

Much study and puzzlement has been spent on the Mediterranean region. There didn’t seem to be anything remarkable about the area, and yet its inhabitants had a much longer average lifespan than their more Westernized counterparts. It turns out that the sources of the calories in the Mediterranean culture tends to cancel out the negative affects. For instance, olive oil contains fats, but also contains excellent sources of antioxidants which have been shown to protect the body from conditions that lead to cardiovascular disease. Olive oil has even been shown to help reduce blood cholesterol. In contrast, the animal fats consumed by the typical North American tend to increase cholesterol levels.

Another factor is the consumption of red wine. Because of the high salinity of the Mediterranean Sea, wine is a more popular beverage there than would otherwise be the case, and it turns out that wine is also rich in antioxidants which comes from the skins, seeds and stems of the grapes. White wines, however, are fermented without these added parts, and so lack the same qualities.

While genetics, lifestyle, and environment also may contribute to the longevity of the Mediterranean people, it is worth noting that many North Americans are of European and African descent, and yet exhibit no apparent inherited tendency to a longer life. And the Mediterranean region is just as heavily populated as the UK and US. Therefore, only the diet is apparent as the key difference between the cultures.