What You Need To Know About Bell Peppers 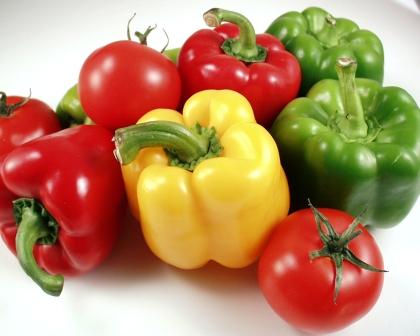 Bell peppers are also known as sweet peppers.  They are not “hot” like other peppers because they contain a recessive gene that eliminates capsaicin.  Capsaicin is what makes other peppers hot.  They belong to the nightshade family and are known scientifically as Capsicum annuum.

Bell peppers come in a wide array of colors with their beautifully shaped glossy exteriors.  Inside the thick flesh of bell peppers is an inner cavity with white spongy core and edible bitter seeds.  Though bell peppers are usually available all year round, they are tastiest and most abundant from August to September.

Reduction In The Risk For Cardiovascular Disease

Bell peppers contain vitamin B6 and folic that are said to be effective against atherosclerosis and diabetic heart disease.  These two B vitamins help reduce high levels of homocysteine in the body.  Damage to blood vessels and increased risk of heart attack and stroke are said to be due to high homocysteine levels in the human body.  Aside from this, the fibers found in bell peppers can also help lower high cholesterol levels, which is another risk factor for stroke and heart attack.

Bell pepper is one of the vitamin A-rich foods that helps promote lung health.  Richard Baybutt, an associate professor of nutrition at Kansas State, discovered that benzopyrene, a common carcinogen found in cigarette smoke, induces vitamin A deficiency.   He also discovered that a vitamin A-rich diet can help to greatly reduce emphysema.  Bell peppers are also rich in beta-cryptoxanthin, a carotenoid that is said to help lower the risk of developing lung cancer.  So for smokers and for those who are constantly exposed to second hand smoke, aside from the advice to quit smoking now or to stay away from second smoke, a diet rich in vitamin A is highly recommended.

Peppers, especially those that come in red, contain lycopene, a kind of carotenoid.  The consumption of lycopene has been said to be inversely correlated with prostate cancer and cancers of the bladder, cervix, and pancreas.  Recent studies suggest that people who have diets that are low in lycopene-rich foods are at a much greater risk of developing the aforementioned types of cancer.

The fibers found in bell peppers are also found to help lower a person’s risk to colon cancer.  This is because the said fibers help reduce the amount of contact that colon cells have with toxins that can cause cancer.  Aside from the fibers, the vitamin C, beta-carotene, and folic acid found in bell peppers are also said to significantly lower the risk of colon cancer.