What is this Mysterious Mediterranean Diet? 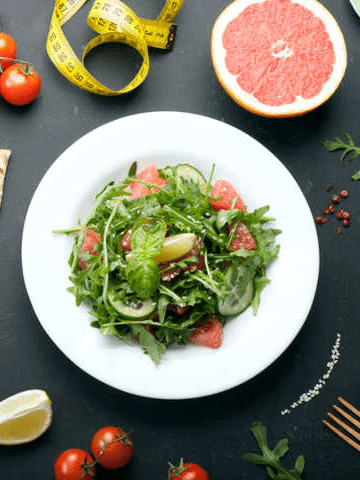 Predominately, the diet is made up of;

*An extensive intake of fruits, vegetables, bread and cereals, potatoes, beans, nuts and seeds
* olive oil is a source of mono-unsaturated fat – common to the Mediterranean area
* some dairy products, fish and even poultry are consumed in sparing to moderate amounts, and some red meat(not much)
* eggs are consumed in low to moderate amount say 1 to 4 eggs a week
* fortunately wine is acceptable but in low quantities ie. 1 – 3 glasses per day

A good question to ask is – Does a Mediterranean-style diet follow American Heart Association dietary guidelines?

Mediterranean-style diets are often close to US dietary guidelines, but not exactly.

The incidence of heart disease in Mediterranean countries is lower than in the United States. Death rates are lower, too. However, there are some who feel this may not be entirely due to the diet. Lifestyle factors (ie. more physical activity and extended social family support structures) may also play a part. At this stage this is just a theory. However the research tells all – the diet has existed for umpteen years.

If you would like further proof of the mediterranean diet benefits resulting from research and qualified researchers you could try visiting http://content.nejm.org/cgi/content/short/348/26/2599 or http://my.webmd.com/content/article/67/80070.htm. Both of these sites give good food for thought(excuse the pun).

“Olive oil plays a central role, but it is not alone,” says Dimitrios Trichopoulos, MD, PhD, of Harvard School of Public Health.

“Its among the divine mix of several factors that, when used in combination, help provide strong evidence of something that is very important — eating the proper diet can significantly reduce your risk of early death.”

He and researchers from Greece studied some 22,000 adults, aged 20 to 86, from all regions of that country; most previous studies tracked only older people who were more likely to die during the study. The participants answered detailed questionnaires about their eating habits throughout the four-year study. Then they were rated on how closely they followed the key principles of the Mediterranean diet.

The findings by Trichopoulos may also help explain why Asians, who typically use these other cooking oils, also have lower disease and death rates. Although they rarely use olive oil, they traditionally follow other principles of the Mediterranean diet — lots of produce, legumes, nuts, and minimally processed grains, with little saturated fat.

“The message remains the same, and is consistent with other findings: A diet lower in saturated fats and higher in monounsaturated fats, and potentially, polyunsaturates, will result in better health outcomes,” says Alice H. Lichtenstein, DSc, of Tufts University and a spokeswoman for the American Heart Association.

“If the main message that Americans get is to just increase their olive or canola oil consumption, thats unfortunate because they will increase their caloric intake and they are already getting too many calories. What they need to do is eat more fruits, vegetables, and legumes and fewer foods rich in saturated fats.”

So in a nutshell, there is sound evidence that the Mediterranean Diet can help reduce heart disease, cancer, weight gain and of course reduce the risk of early death. However, it would be a mistake to think this outcome is based on the use of Olive Oil alone. The diet is diverse and allows for taste and creativity which is often lacking in most other diets. This alone warrants further investigation from those who seek a healthy, easy diet that has flavour and is fullfilling. Remember too that just as in all worthwhile diets, moderate level exercise should not be overlooked.

Publisher & author: Ray Baker. Roy has an indepth and long established background with the vitamins, minerals and health industry and has researched and experimented with many diets over a thirty year period.
Here’s more about %NEXTARTICLE%