A Moussaka Recipe For You 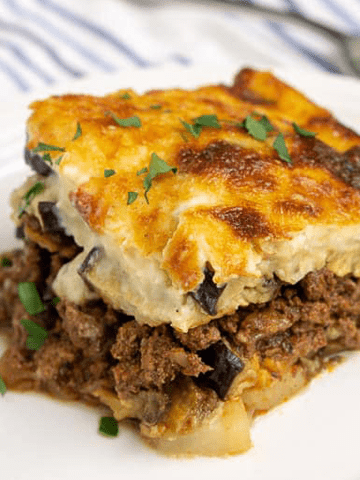 One of my very favorite meals of all time. It never gets thrown away and puts a smile on every ones face at meal time. This traditional Mediterranean meal is a Greek dish and it includes not only traditional eggplant and lamb, but also potatoes for a tasty, comfort food casserole. It’s as easy as pie too (excuse the food pun).

Slice the eggplant in half, then score the cut side with a sharp paring knife without breaking the skin. Heat a large skillet over high heat.

Mix in 2 tablespoons of the olive oil, then add two eggplant halves, cut side down. Sear for 1 minute, add 3 tablespoons water. Cover and reduce the heat to low. Steam the eggplant halves for 10 minutes. Set the halves aside to cool on a large platter and repeat with the remaining halves.

When the eggplant has cooled enough that you can handle it, scrape the pulp into a large bowl using a teaspoon, taking care not to break the skin. You should have 4 cups eggplant pulp. Reserve the skins, discarding any additional pulp.

Include the 4 cups eggplant pulp and the sweet vermouth. Mix well with a wooden spoon, then stir in the cinnamon, salt, cumin, and pepper. Continue cooking until the eggplant gives off its liquid and begins to coat the pan with a fine film, about 5 minutes, stirring constantly. Set aside to cool for at least 30 minutes. (The eggplant filling can be made up to this point a day in advance; cover tightly when cooled and refrigerate, then allow to come back to room temperature before proceeding.)

You can peel (some don’t) the potatoes and cut them in half. Beginning with the cut side, cut off thin slices, using a sharp knife or a sturdy vegetable peeler. Place the potato slices in a large bowl of water as you work.

Boil a medium pot of water. Drain the potato slices and add them to the pot. Cook just until crisp, about 3 minutes. Drain — taking care, as they are fragile — and set aside.

Stir the eggs into the eggplant pulp mixture. Position the rack in the center of the oven and preheat the oven to 350 degrees F. Oil a 2-quart high-sided souffle dish with olive oil.

Slightly oil up (olive oil only) a 10-inch-long piece of foil. Place it, oiled side down, over the casserole and loosely seal it. Bake the moussaka for 1 hour 30 minutes. Let cool on a wire rack for 5 minutes, then serve.