A Look At The Mediterranean Diet Pyramid 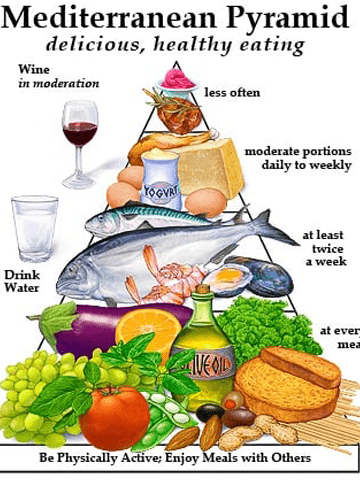 When we look to healthy eating choices, we are the most familiar with the food pyramid provided by the FDA. This is mostly based on portion size and does not make allowance for the many different qualities of various food sources. It is based on the assumption that everyone knows that all processing done to food makes it less healthy. Unfortunately, common knowledge and common practice often do not go together. As people do begin to learn that whole food choices offer more health benefits over the more typical processed food choices, they are seeking out suggestions for what foods to put together into a better dietary plan. 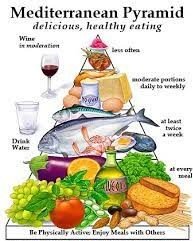 The Mediterranean diet pyramid starts with red meat at the top, being the one source of animal protein; do not be alarmed, as red meat is consumed the least of all in a Mediterranean diet. Under that we find the other common sources of animal protein, such as eggs, poultry and fish. Next, we find dairy products such as cheese, yogurt, and butter. The most common source of fat in the Mediterranean diet pyramid is extra virgin olive oil. Not only does it give the diet a full, distinctive flavor, olive oil is also one of the most excellent sources of antioxidants.

The next level of the Mediterranean diet pyramid is occupied by fruits, vegetables, beans, legumes and nuts. These are eaten in great abundance, whether it is raw or lightly cooked. Pickled foods are also eaten for a flavorful variety, but only in moderation.

The last level has the familiar bread and grains group, with bread, pasta, rice, couscous, polenta and other whole grains. The point where this differs from the typical America diet is that these sources are consumed in the whole grain, and so are not filled with the levels of preservatives that American food does. The lower amount of processing also improves the fiber density of grain-based foods.

In most diets worldwide, we find that the calories break down into a ratio of 20% protein, 30% fat and 50% carbs. The Mediterranean diet pyramid isn’t that much different from the diets of other regions, but rather the difference is in the quality and variety of foods eaten. The Mediterranean diet is based on the idea that fresh, whole foods provide a dietary benefit over the highly processed foods that make up the most of the diet from other industrialized nations. The elimination of processed foods entirely is probably not necessary, but cutting out a significant portion of them has proven to be beneficial.

Hope that was of some interest,